Join us for an evening with Charles Burns and Chris Ware in conversation. We will be celebrating the publication of Ware’s newest book, Acme Novelty Library #20, and Burns’ newest book, X’ed Out.

X'ed Out is a brand new, never before serialized graphic novel drawing inspiration from Hergé and William Burroughs. Burns has given us a dazzling spectral fever-dream—and a comic-book masterpiece.

CHARLES BURNS grew up in Seattle in the 1970s. His work rose to prominence in Art Spiegelman’s Raw magazine in the mid-1980s and took off from there. He has illustrated covers for Time, The New Yorker,and The New York Times Magazine, among many other publications. Burns was the editor of Houghton Mifflin’s The Best American Comics 2009. Burns’s most recent book, Black Hole, received Eisner, Harvey, and Ignatz awards in 2005. He lives in Philadelphia. 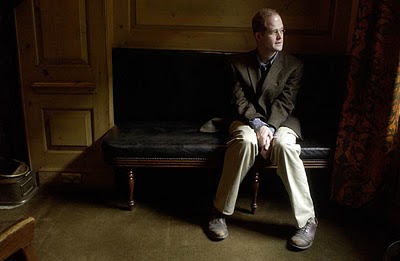 CHRIS WARE is the author of Jimmy Corrigan—The Smartest Kid on Earth and the annual amateur periodical The ACME Novelty Library. A contributor to The New Yorker and the Virginia Quarterly Review, Mr. Ware was the first cartoonist chosen to regularly serialize an ongoing story in the New York Times Magazine in 2005 and 2006. He edited the thirteenth issue of McSweeney’s Quarterly Concern in 2004 as well as Houghton Mifflin’s Best American Comics 2007. His work was included in the 2002 Whitney Biennial, was favored with an exhibit of its own at the Museum of Contemporary ArtChicago in 2006, and will be exhibited at the Gävle Konstcentrum in Gävle, Sweden, in 2010. Mr. Ware lives in Oak Park with his wife, Marnie, a high school science teacher, and their daughter Clara.

This will be a ticketed event. ADMISSION $10.

Each ticket can be redeemed for$10 off the purchase of EITHER X’ed Out OR Acme Novelty Library #20 at the event OR buy both titles and get $15 off the total.

This event is co-sponsored by The Book Table, Unity Temple Restoration Foundation, the Friends of the Oak Park Public Library and Midwest Media.

Tickets available at the door.

During Illinois's Shelter in Place order, we will only be able to fulfill web orders through our wholesaler. We are currently closed to the public. Be well and stay safe.