As part of Guy Delisle's first ever North American tour, please join us in celebrating his new award-winning graphic memoir, Jerusalem: Chronicles from the Holy City.

"Neither Jewish nor Arab, Delisle explores Jerusalem and is able to observe this strange world with candidness and humor...But most of all, those stories convey what life in East Jerusalem is about for an expatriate."–Haaretz

Guy Delisle expertly lays the groundwork for a cultural road map of contemporary Jerusalem, utilizing the classic stranger in a strange land point of view that made his other books, Pyongyang, Shenzhen, and Burma Chronicles required reading for understanding what daily life is like in cities few are able to travel to. In Jerusalem: Chronicles from the Holy City, Delisle explores the complexities of a city that represents so much to so many. He eloquently examines the impact of the conflict on the lives of people on both sides of the wall while drolly recounting the quotidian: checkpoints, traffic jams, and holidays.

When observing the Christian, Jewish, and Muslim populations that call Jerusalem home, Delisle’s drawn line is both sensitive and fair, assuming nothing and drawing everything. Jerusalem showcases once more Delisle’s mastery of the travelogue. 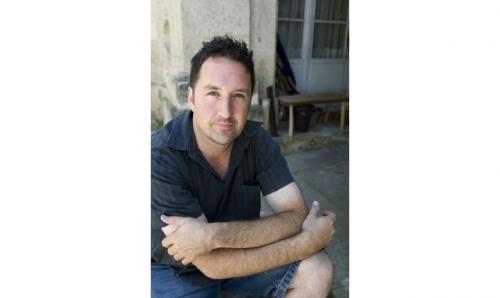 Born in Quebec City in 1966, Guy Delisle now lives in the South of France with his wife and son. Delisle has spent ten years, mostly in Europe, working in animation which allowed him to learn about movement and drawing. As the majority of animation is now done in Asia, Delisle is currently focusing on his cartooning. In addition to Drawn & Quarterly, Delisle is published by Editions de L’Association and Editions Dargaud in France, and Editions de La Pastheque in Montreal. Delisle is the author of Burma Chronicles, Pyongyang: A Journey in North Korea and Shenzhen: A Travelogue from China.

This event is co-sponsored by The Book Table and the Oak Park Public Library. It is FREE and open to the public. Guy will be presenting a slide show, conversing and signing.

"[Delisle's books are] some of the most effective and fully realized travel writing out there." --NPR

"Delisle knows what he is doing." --Joe Saco