Tavi Gevinson started her personal blog, STYLE ROOKIE in 2008, when she was 11 years old. It was a place where, from the confines of her bedroom in the suburbs, she could write about personal style and chronicle the development of her own. Within two years, the blog was averaging 50,000 hits per day. Soon fashion designers were flying her around the world to attend, and write about, fashion shows, and to be a guest of honor at their parties. Soon Tavi's interests grew beyond fashion, into culture and art and, especially, feminism. In September 2011, when she was 15, she launched ROOKIE a website for girls like her: teenagers who are interested in fashion and beauty but also in dissecting the culture around them through a uniquely teen-girl lens. ROOKIE broke 1 million page views within its first six days. ROOKIE YEARBOOK ONE will collect articles, interviews, photo editorials, and illustrations from the highly praised and hugely popular online magazine. In its first year, ROOKIE has established a large, inclusive, international community of avid readers. In addition to its 50-plus regular writers, photographers, and illustrators (many of whom are teenage girls themselves), ROOKIE's contributors and interviewees have included prominent makers of popular culture such as Lena Dunham, Miranda July, Joss Whedon, Jon Hamm, Zooey Deschanel, David Sedaris, Elle Fanning, Amy Poehler, Paul Rudd, John Waters, Chloe Sevigny, Liz Phair, Dan Savage, JD Samson, Ira Glass, Aubrey Plaza, Daniel Clowes, Carrie Brownstein, Paul Feig, Bethany Cosentino, Kimya Dawson, Fred Armisen, and Winnie Holzman.

As a young teenager, Tavi couldn't find what she was looking for in a teen magazine; ROOKIE is the one she created herself to fill that void. Her cool-headed intellect shines in ROOKIE, arguably the most intelligent magazine ever made for a teen-girl audience. Tavi writes with a humble but keen authority on such serious topics as body image, self-esteem, and first encounters with street harassment. She's equally deft at doling out useful advice like how to do a two-minute beehive, or how to deliver an effective bitchface. ROOKIE's passionate staffers and faithful readers have helped make ROOKIE the strong community that it is. To date, Tavi has written for Harper's Bazaar, Jezebel, Lula, and Pop, and is a contributing editor for GARAGE magazine. She has been profiled in the New York Times and The New Yorker, and has been on the cover of POP, L'Officiel, Zeit Magazin, and BUST. As a speaker, she has made numerous presentations at venues such as IdeaCity, TEDxTeen, L2 Forum, and the Economist World in 2012 Festival. Last year Lady Gaga called her "the future of journalism." 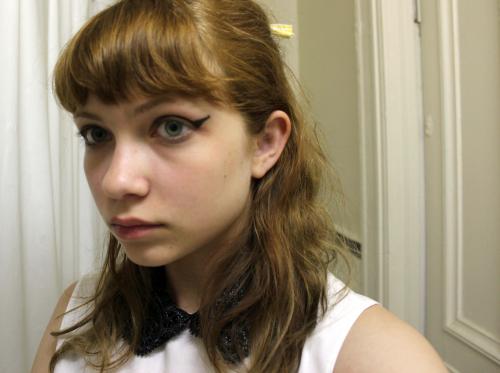 Tavi Gevinson is the editor and founder of ROOKIE. She lives in Oak Park, Illinois, with her family and many piles of candy-bar wrappers.

Your ticket may be redeemed for $10 off the cover price of Rookie Yearbook One at the event.

This event is co-sponsored by Unity Temple Restoration Foundation.

There are still tickets available, but at this late hour you will need to purchase them at the door. Sorry for the inconvenience!